This year marks Earth Celebration’s 33rd year in running. With the event being held online this year, we are using this opportunity to share some of the memories from previous years.

The EC Shiroyama Concerts may bring flashbacks to those long-time EC fans.
There will also be footage of the newer EC atmosphere at the Harbour Market Concerts as well as traditional folk art from Sado Island and message videos from past EC guests!

Vintage EC clips from the past will be shared as we count down the days to this year’s EC Live-streaming event!
Let the countdown begin with only one month to go until Earth Celebration 2020!

In 1998, EC was held for the first time in May. Marcos Suzano, a "pandeiro" player, came from Brazil for the evening concert at Ayusu Kaikan.
Pandeiro is a Brazilian style tambourine. He studied the techniques of drummers from various genres and created a unique playing style on the Pandeiro.
At this concert, he collaborated with artists such as guitarist Kazumi Watanabe and Kodo, filling the venue with enthusiasm.

The guests of the 2003 Earth Celebration were the “Coulibaly Family” from Burkina Faso, West Africa. The group consisted of percussion instruments, dance, and songs. The main instruments were the “Djembe,” which is familiar in Japan, the “Runga” that is played by tightening and loosening an hourglass-shaped body with leather straps, the “Balafon,” a gourd-resonated xylophone, a large cylindrical drum called the “Kenkeni,” and the larger “Dum’Dum,” in charge of the bass sound. They value acoustic resonance, and even at EC they were able to conjure the hot African breeze.

Our guest artist for Earth Celebration in the year 2000 was Kim Duk-Soo SamulNori, led by Kim Duk-Soo from South Korea.
Appearing for the second time as a special unit on the EC stage, the world-class percussion troupe blew the audience away with a thrilling performance for the first time in 11 years.

With a friendship that goes back to the first collaboration performance in 1989, Mr. Kim returned last year to Sado to perform at EC for the third time!

For the 1999 Earth Celebration, Huun Huur Tu came to Japan from the Republic of Tuva in central Asia. They performed a unique performance with a variety of musical instruments including Tuva’s folk instrument called the Doshpuluur, and the traditional singing method, “Homei”.

Homei uses formats that result from vocalization that fills the throat.
Famous for being transmitted to the ethnic groups around the Altai mountains in central Asia, the Mongolian "homey" is well known in Japan, but in Tuva, it is called "homei" or "fumei".

In 1998, the 11th Earth Celebration was held for the first time in spring (May 8-17). The guests were the "Red Willow Dancers" led by Benito Concha. They are Native Americans from Taos Pueblo, in New Mexico, USA. Mr. Benito was born and raised in a family lineage that inherited drum and dance from generation to generation, and came to EC with nine other relatives and friends. Together with the Kodo members, they connected Sado and Taos with the sky.

At this EC, Mazatl Galindo, Benito’s music companion who is widely engaged in music, dance, and painting, also participated as a flute player.

20days until Earth Celebration 2020!
Historical videos of the past ECs are released to the public, prior to our livestream!!
Don't forget to subscribe to our channel!


This video is a documentary of Earth Celebration held in 1994. For the Shiroyama Concert, we welcomed Soul Performing Arts Company from Korea and Costa Caribe from Venezuela, and opened the "Tent Theatre" for one week as a pre-event. Please enjoy the atmosphere of those days.

This video is a documentary of Earth Celebration held in 1993. The Shiroyama Concert was held with Renegades Steel Drum Orchestra from Trinidad & Tobago and Kansadan from Thailand. It was a rainy EC. Please enjoy the atmosphere of those days.

This is a scene from "Kodo Special Fringe" held at Earth Celebration in August 22, 1992. It was a dance workshop with Kodo members and saxophonist, Kazutoki Umezu, in a choreography to Kodo's signature piece, "Irodori", but it turned out difficult than expected! Still, everyone danced with lots of energy, and received all smiles and a big round of applause from the audience at the end.

In 1988, the inaugural Earth Celebration was held, where guests from the Republic of Burundi in Africa, called The Drummers of Burundi, came to Japan for the very first time. The drums were carried on their heads, as they played a piece and entered the park.
The drums are arranged in a semi-circle, and a drum called "Inkiranya" is placed in the center to lead the performance.
The drummers on the left half of the semi-circle called, ”Amashako”, plays the base rhythm, while the drummers on the right half called, “Ibishikiso”, plays along with the Inkiranya. Performers alternate playing the Inkiranya, occasionally showing the rhythm by jumping and dancing, as the rest produces a harmony in response.

It was a grand event held in the newly built Kodo Village, with appearances by various guests such as artists, Seitaro Kuroda and novelist, Kenji Nakagami.
A live painting by Mr. Kuroda was held with Kodo's performance. 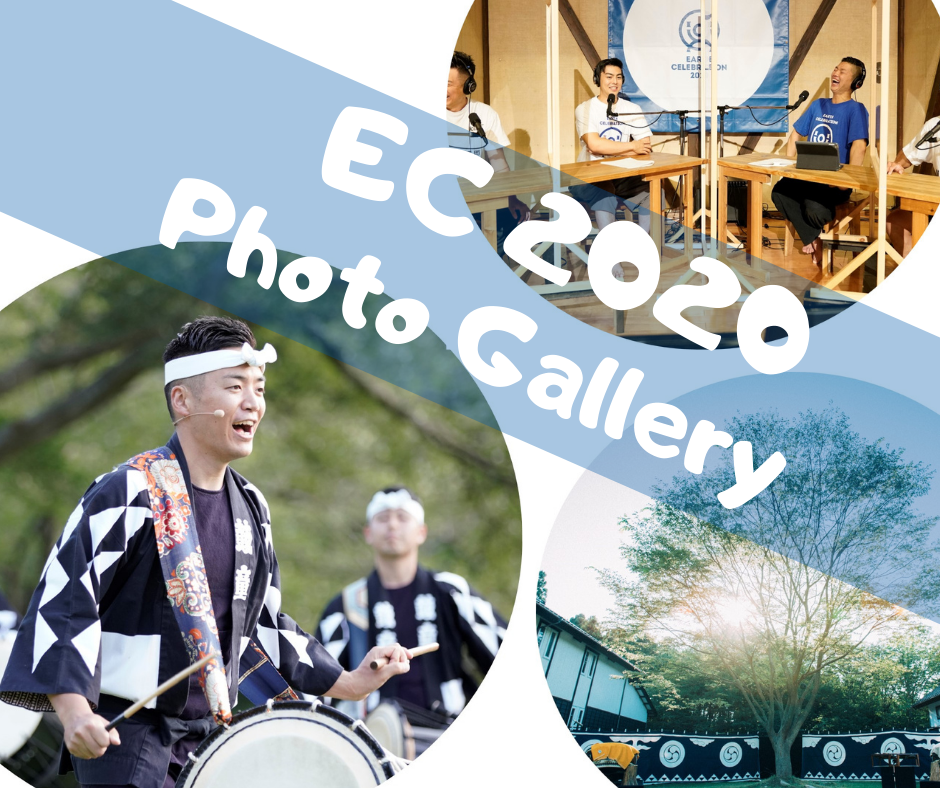 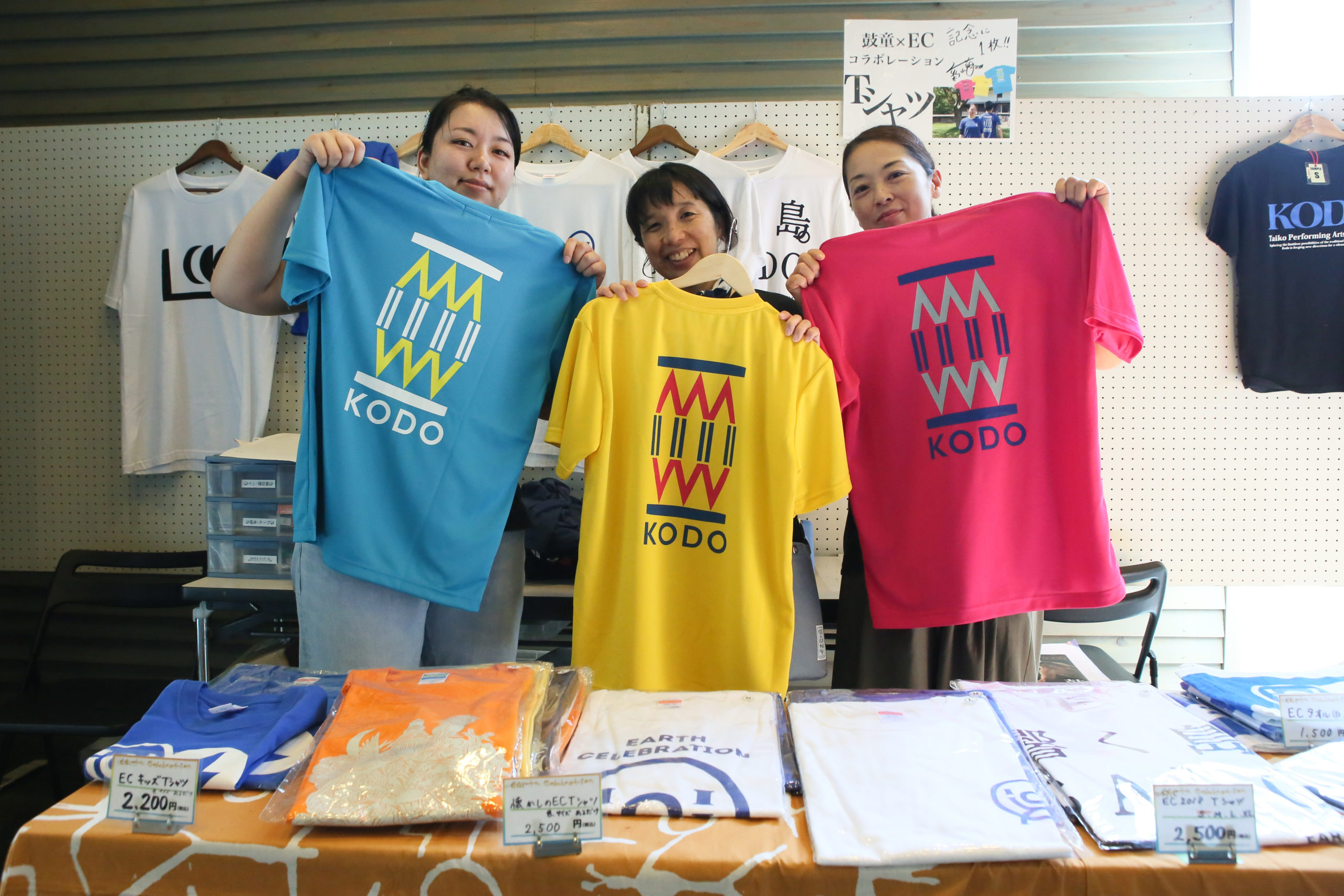